Bangable Family Edition! With the impending royal nuptials and after having trolled the British line of succession for a few hours (did you know that the list numbers in the thousands?), I decided to introduce some patrilineal love here on BDiH with the Houses of Windsor and Holstein-Gottorp-Romanov. And since I have already profiled Edward VIII, he's included here in spirit but not in pie chart. 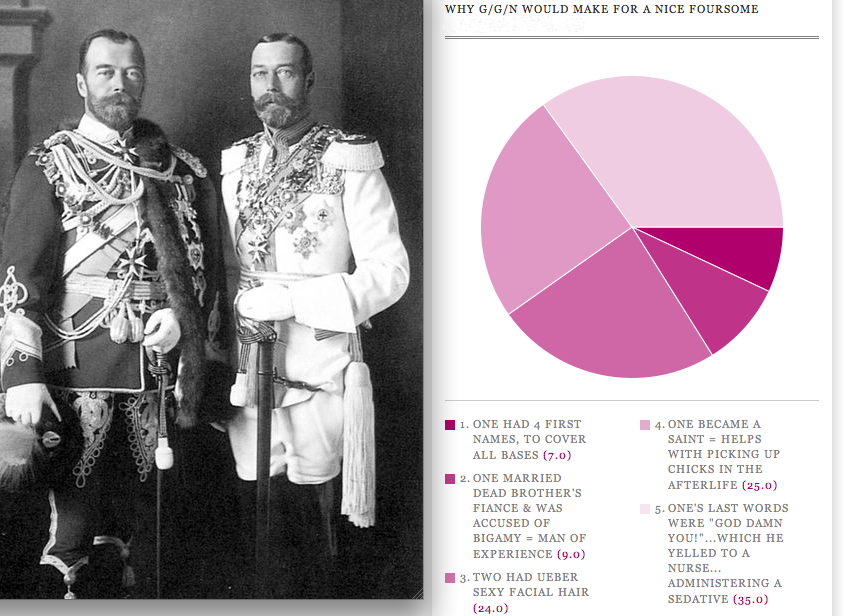 Speaking of bigamy, did you know that Bormann and Himmler were pushing to legalize polygamy in Nazi Germany? The theory was that women would greatly outnumber Nazi men after the war due to the death toll from battle, and thus all of those able wombs would go un-babied. So in order to Aryanize the planet, men would be able to adopt multiple wives. And as a sort of conciliatory prize for women's submission, the first wife would be given the title "Domina." You know, the master of all the other bitches.

And here's George VI (then Prince Albert) with some unibrowed dude named Courtney. And some other guy.

Next Time: An American Poet ... I've received an overwhelming number of submissions for a certain individual, so the poet in question will have to wait ... but the latter will be up this weekend, I promise (submission edition!)
Posted by Megan at 1:53 AM