Whoop whoop! Shoutout to all the rad sites that have given mention to BDiH in the past few days, and also to everyone who has sent in submissions. My inbox is overflowing with hotness! I promise to be on my A-game and publish the pie charts more promptly, since it will obviously take some time to highlight all of these boners (please note: I use the term freely to describe hot guys in my everyday speech. I know it sounds juvenile, but then again, I suppose it's an adequate reflection of me). Now to get on with the important stuff!

I have had an overwhelming number of suggestions for one dead dude in particular (yes, I have had a similar number for Lord Byron, who I will make mention of shortly). I had no idea there was such a following for this guy! So I want to thank everyone who has submitted his name, and I'd like to give a shoutout to these ladies in particular, since they were among the first submitters: Ani, Jenna, Danielle, Marisa and Emily. Thanks, guys! 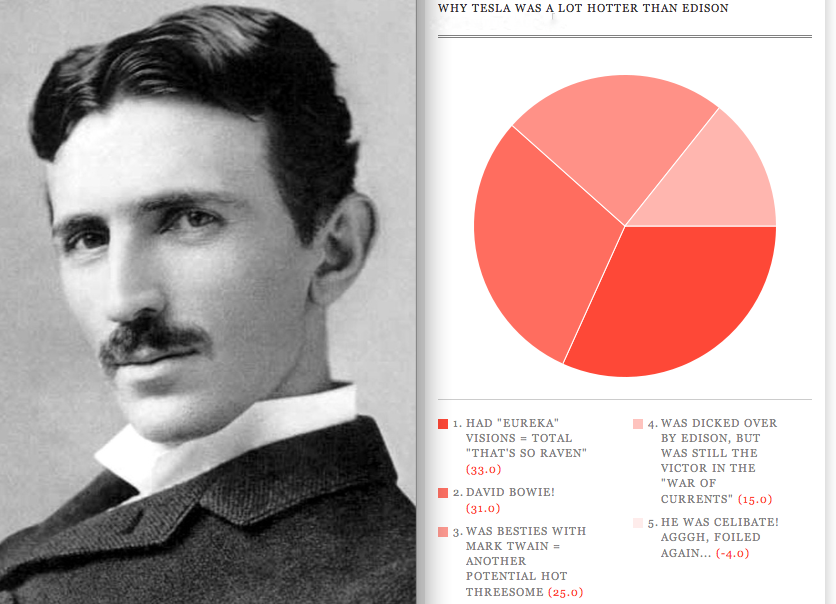 I don't know why Tesla wasn't on my radar earlier: his belief that women would become the future dominant sex, his revulsion to pearl earrings (sorry, Vermeer), his reasons for being a vegetarian, his Teslascope for communicating with extraterrestrial beings. And though I'm on the fence about this whole celibacy thing, whether or not that makes the unattainable more appealing, it seems the chicks were totally into him around the turn of the century. Though, uh, there was that whole pro-eugenics thing...

And let's just assume that all posts that follow are "submission editions" for the time being, in light of the number of excellent tips I have received.

Next Time: American Would-be Assassin
Posted by Megan at 1:48 PM